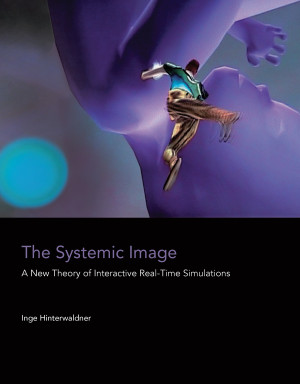 “The Systemic Image: A New Theory of Interactive Real-Time Simulations”

Computer simulations conceive objects and situations dynamically, in their changes and progressions. In The Systemic Image, Inge Hinterwaldner considers not only the technical components of dynamic computer simulations but also the sensory aspects of the realization. Examining the optic, the acoustic, the tactile, and the sensorimotor impressions that interactive real-time simulations provide, she finds that iconicity plays a dominant yet unexpected role. Based on this, and close readings of a series of example works, Hinterwaldner offers a new conceptualization of the relationship between systemic configuration and the iconic aspects in these calculated complexes.
Hinterwaldner discusses specifications of sensorialization, necessary to make the simulation dynamic perceivable. Interweaving iconicity with simulation, she explores the expressive possibilities that can be achieved under the condition of continuously calculated explicit changes. She distinguishes among four levels of forming: the systems perspective, as a process and schema that establishes the most general framework of simulations; the mathematical model, which marks off the boundaries of the simulation’s actualization; the iconization and its orientation toward the user; and interaction design, necessary for the full unfolding of the simulation. The user makes manifest what is initially latent. Viewing the simulation as an interface, Hinterwaldner argues that not only does the sensorially designed aspect of the simulation seduce the user but the user also makes an impact on the simulation—on the dynamic and perhaps on the iconization, although not on the perspectivation. The influence is reciprocal.